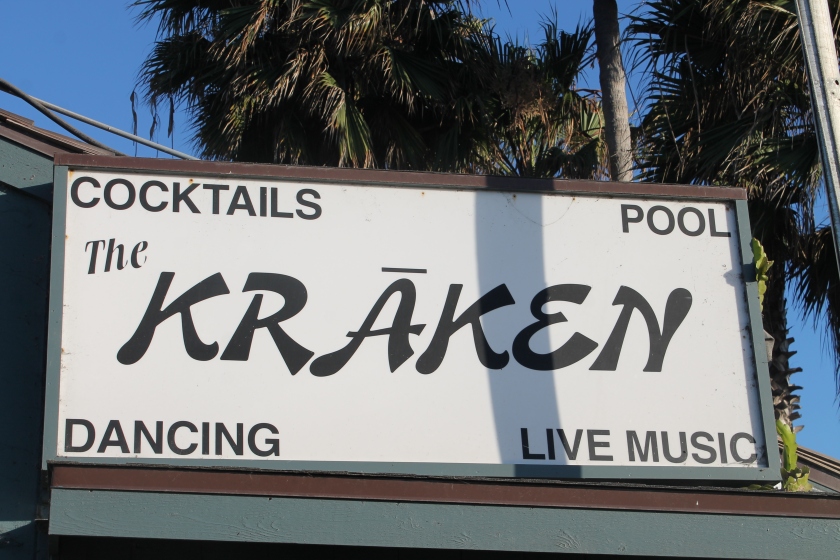 When I asked my friend Rebecca if she wanted to join us on this week’s blog at The Kraken, she said,  “Honestly? I’m scared”.  And then I realized something.  I was scared too!

We pulled the mini van into the parking lot that was filled with pot holes and puddles and found a spot between some Harleys and a Corvette.  We stepped out of the car and were instantly told, “You’re LATE” by a very gruff guy wearing a leather jacket with a cigarette hanging out of his mouth.  We arrived at 6:30pm, planning to eat dinner before the 7:00pm band started.  The people here were left overs from the afternoon crowd who were here for mid-day drinking and to watch the band “Rat Motor” who finished their set just as we arrived.   So I suppose we were late. (I love when a band’s name with only two words tells you everything you need to know about what style of music they play.  “Rat Motor” says it all.  And I’m glad we were late.)

None of our group wore leather, smoked or had any visible tattoos.  We were fish out of water at this Cardiff-dive-biker-bar.  I just wanted to come out of this experience alive.  We squeezed past the enormous and very scary looking bouncers and made our way to the bar to get some drinks.

I glanced across the street at the Pacific Coast Grill as they were valeting someone’s Range Rover and chuckled at the juxtaposition of both clientele and class.

The Kraken is laid out in segments.  As you walk in, you have the bar, a place for the band, and a large area for drunken dancing.  As you move inside, you have the restrooms, and a bunch of games and things all over the walls and ceiling.  It is quite over-stimulating. 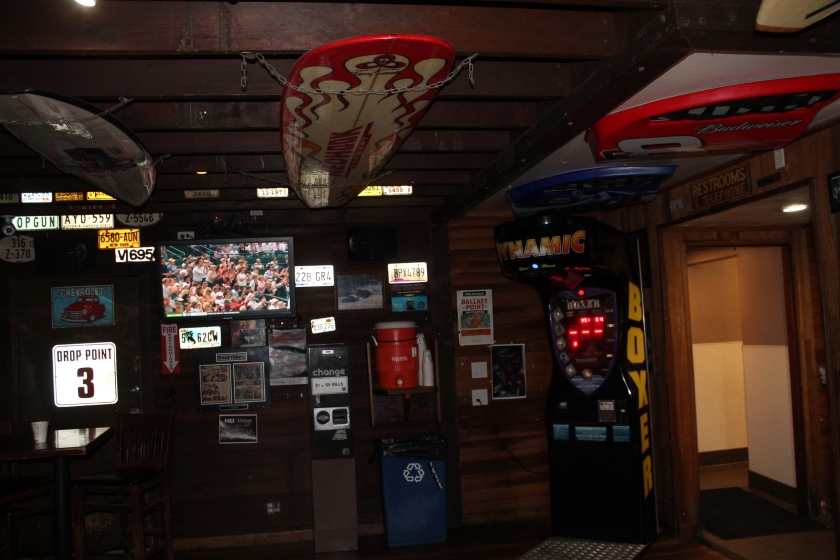 Keep going and you will find the large, open-air back patio with a nice view of the lagoon and 3 pool tables.

I am always so impressed with how few people smoke in our city compared to anywhere else I go.  People in San Diego just don’t smoke, I always thought.  I was wrong.  There are lots of smokers in this town, and they are all hanging out on the Kraken’s back patio.

There’s a food truck parked out back called The Tip of Cardiff. Instead of your typical greasy, fried bar food, you can get a healthy, organic meal here.  What a surprise!

There’s a bit of a wait to get your food once you’ve ordered, but this cute girl will come find you in the bar and bring it to you there, so have a beer and play some pool while you wait.

Lynne ordered a M.O.A.B. (Mother of All Burgers), without a bun.  She was very impressed of the elongation they created in her patty as a way to hold it easier in her lettuce wrap, I assume.  The burger was huge, very juicy and delicious!  It got a 9.5/10 on the Lynne Scale.  Meat just tastes better elongated rather than round for some reason.

Hubby ordered a Hot Chick organic chicken sandwich.  He thought it was a bit bland but he was very happy to be eating something hearty with his Stone Delicious.

Debbie and I both ordered the Mahi-Mahi sandwich.  What a beautiful chunk of fish we were given!  It too was a wee bit bland, but it was cooked perfectly.  It paired beautifully with my Sculpin IPA. 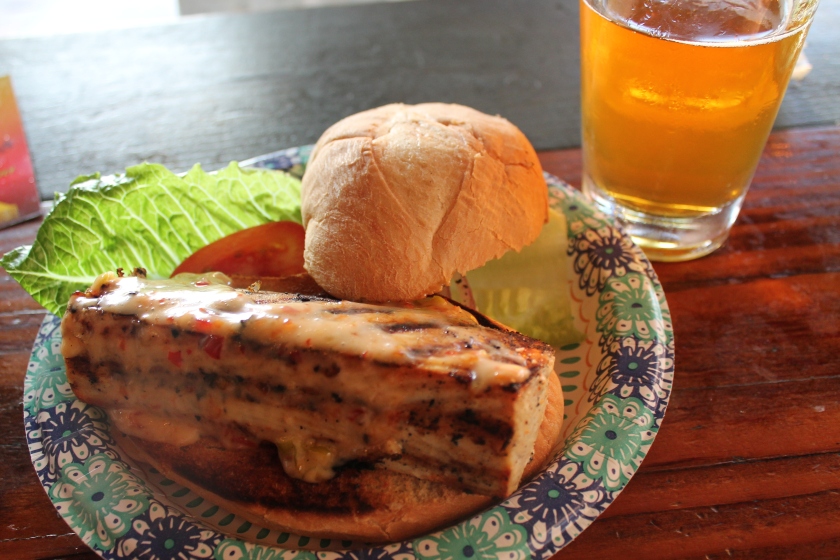 Tracy did things right and ordered the Tri-Tip.  After all, that’s the name of this place!  I think they put so much flavor into their tri-tip they just ran out for the mahi-mahi and chicken sandwiches.

With one beer in, I had to get something cleared up.  I put on my big girl panties and walked up to one of the terrifying bouncers to ask the question that has been bugging me.

“Excuse me, sir?” I meekly asked. Please don’t hurt me.  “Um, can you please explain why you pronounce the name wrong here?  It should be The Kracken (short “a”), and I believe you are all saying it wrong” I informed him.  With a huge eye roll he said, “Look at our shirts” and sure enough… 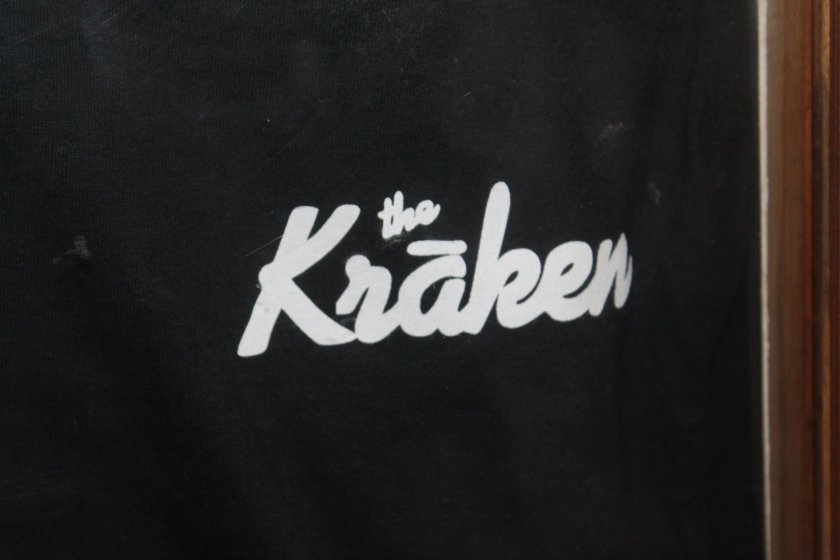 But I live with 3 science fiction nerds who are always yelling, “RELEASE THE KRAKEN!”. (short “a”)

Then I looked around and saw the macron over the “a” in the word “Kraken” all over.  It’s on their shirts, their advertisements, even right on the sign out front!   Obviously, I am not the only fool who wants to pronounce it wrong!  (And NO, I didn’t know it was called a “macron”.  But I figured the little straight line thingy had a fancy name and I was right.)

Soon the scary looking biker crowd was revving up their hogs and heading out, right when the next band was starting.  We ordered more drinks, and decided it was time to head into the drunk dancing room (Area 1).  The band, Circa Sonic was belting out some Sound Garden.  Although the lead singer wasn’t exactly channeling Chris Cornell from his grave, he gets an A for effort.  With a really good band, and tons of conviction, a mediocre voice can go a long way!

And by the time we drank some more, this band’s 80’s and 90’s grunge music got really good!  The lead singer found his groove with Alice and Chains, Sublime, STP and even nailed Van Halen and Zeppelin.  They played the songs we all love to sing too, even if they were hard to dance to.  But we didn’t care and were dancing up a storm, making up the words as we sang along!   I was completely carefree with the certainty that no one else I knew would show up here and see my bad dancing or hear my horrific singing.  Though no one was more carefree then the VERY wasted fan Circa Sonic has.  Just the one.  But she was having THE best time there.  I danced with her, my friends danced with her, and she danced alone.  She even danced when their was no music during their break.  The great thing about The Kraken’s drunk dancing room, is that no matter how drunk you get, there will always be someone more drunk then you there! 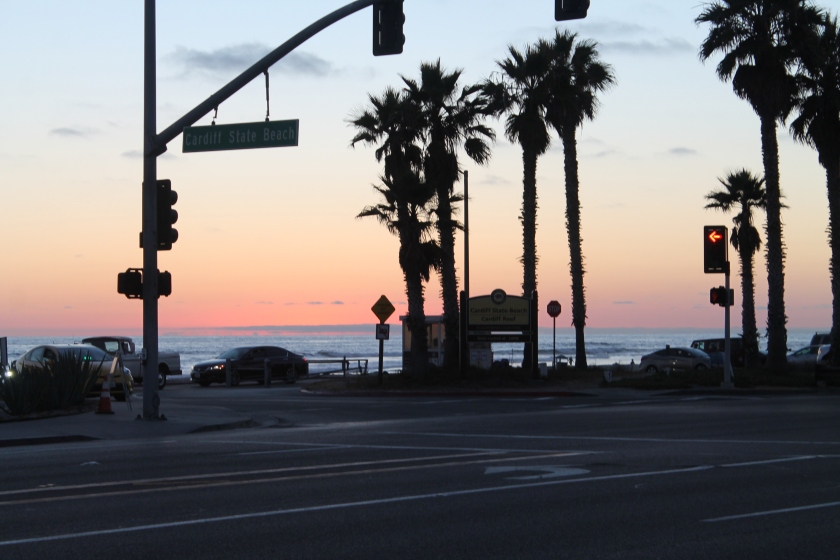 I was scared to come to The Kraken.  And it is actually a little scary, though the people we dared talk to were all really nice. This place is sooooo much fun!  The food truck is way better than having fried chicken wings and nachos.  Just stick to their burgers and tri-tip for the very best of what they have.

There is the smell of cigarettes on the patio and the smell of stale beer and drunken mistakes inside.  And let’s just say you won’t want to touch anything in the bathrooms.  However, this place has CHARACTER!  So much character I could hardly stand it!  They have live music almost every night.  Look for Circa Sonic, because they rock!  Will I come back to The Kraken?  Oh hell yes I will!

By the way, if you didn’t already know what a Kraken is, it’s a an enormous mythical sea monster said to appear off the coast of Norway. 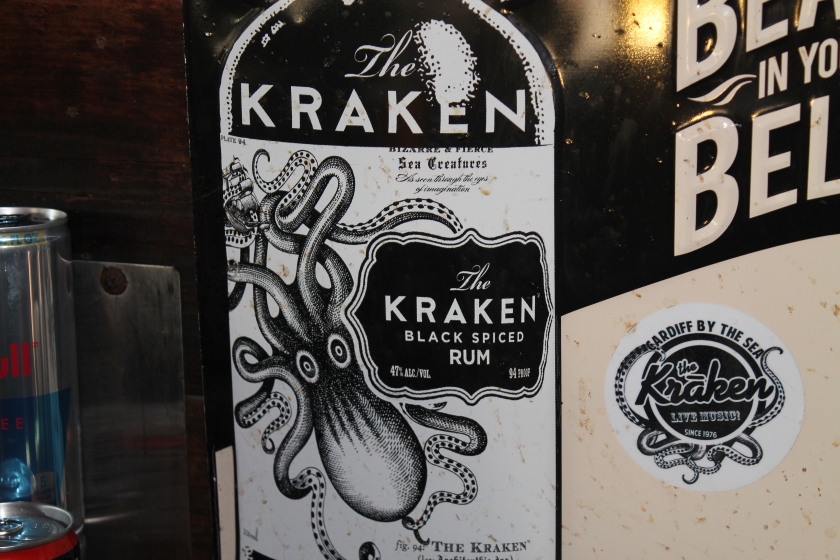 Here’s the deal with the this part of the 101 going north through Cardiff:  There’s NOTHING!  Not one single restaurant all the way until Swami’s Cafe in Encinitas!  So we will be taking a tiny detour off the 101, and will head north on San Elijo Ave. which runs alongside the 101 but is filled with all kinds of eateries we don’t want to miss!  We will head back down to the real 101 in time for Swami’s Cafe.

Next week’s blog will be on Sunday, July 8th, 6pm at