I was excited to try Death by Tequila.  We walked by the place last week on our way to Eve Encinitas where good smells were coming from inside.  It had tasteful decor and looked nice.  They take reservations which is handy. There was a beautiful table set up for our group of 10 by the time we arrived. 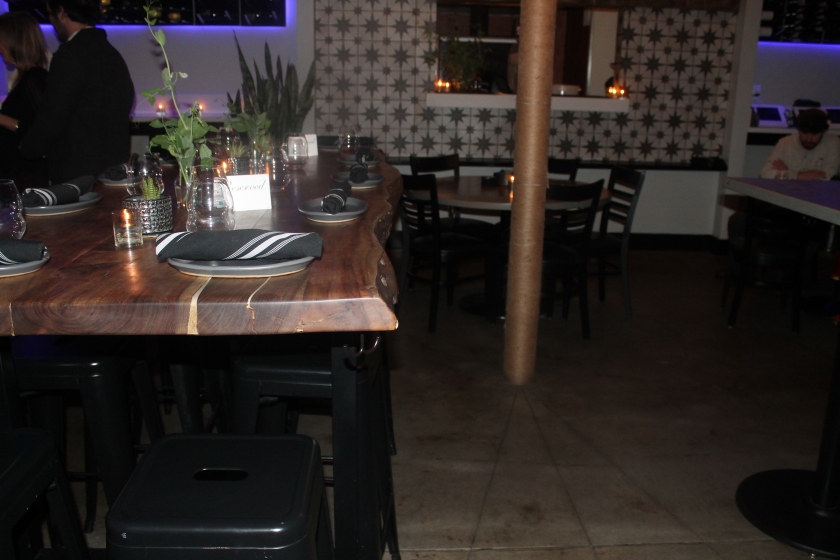 Although their website proudly boasts “with  over 100 brands of curated tequila” they had only a teeny tiny fraction to offer us.  Look at the tequila menu with everything scratched out except the piddly few things they had available.

Our server explained to us that they are waiting for their new shipment of tequila.  I asked when would it be here and she said she has no idea but it must be very soon because they are sold out of almost everything.   It’s a TEQUILA BAR WITH ALMOST NO TEQUILA!!  WHAT IS GOING ON HERE?!  If you are phasing out some bottles, have others available before you run out!

“Then you must have what’s left on clearance” piped in Hubby. That would be a “NO” with a distasteful look from our server. Made perfect sense to me.

I was about to ask our server a question about which of the three tequilas I should order, when Hubby rudely interrupted me and said, “remember Rich’s wedding…”.  You see, Hubby was scared that I was going to have the server just choose one for me.  At Rich’s wedding back in 2000, Jennifer and I wanted to do something special.  We went up to the bar and asked for a shot of their finest tequila for the groom.  We were willing to split the assumed $20-$30 shot for our friend Rich.  It was his wedding and he deserved a shot of the best!  Rich drained that shot, thanked us and went back to the dance floor.  “That will be $150” the bartender told us.  So you can understand Hubby’s fear here.

We chose to try a “Melagro Select Barrel” for $15. A small price in comparison but a $15 shot is still $15!  Wouldn’t it have been nice for the server to tell us a little about what we were drinking?  Share some tequila knowledge at this tequila bar?  Nope.  But I’ll tell you what, I thought it was outstanding!  A little rough going in but very smooth and sweet going down. 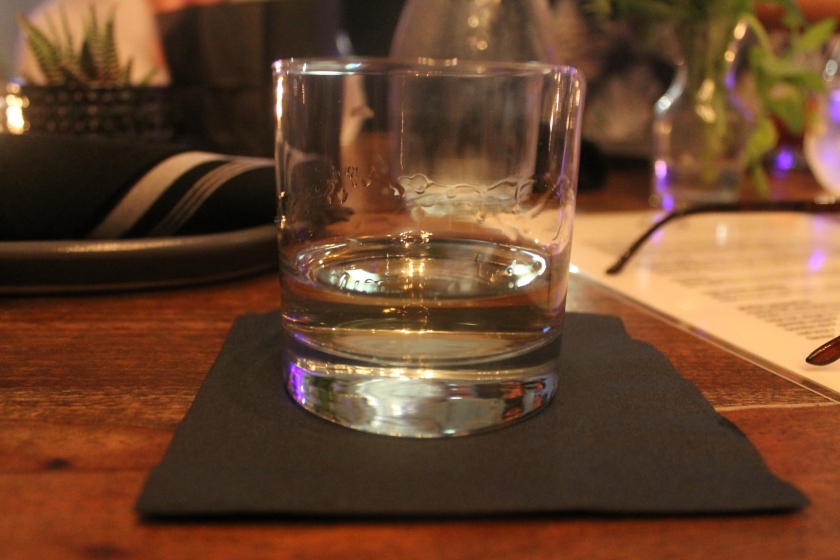 Joyce tried to order a glass of rosé and was told they were sold out of that too.  There is literally a liquor store across the street.  If you are sold out of rosé, run over and buy your customer a bottle.  You know what else they sell there?  Tequila!

Dave ordered a drink called “El Jefe” and was surprised at how bitter it was considering there weren’t any bitter components to it.  On a positive note, we all liked the very square ice cubes . 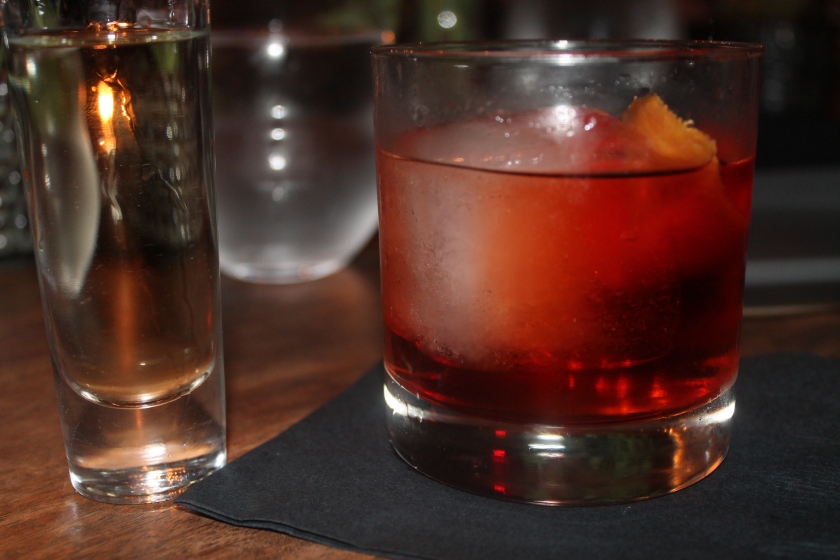 Oldest’s girlfriend ordered a Baja Street Tostada for $10.  She picked at it but was unimpressed and didn’t finish it even though it was quite small.

We are a guacamole-lovin’ family and were excited to try a flight of three for $15. They looked pretty, but not a single one was very good.  The “Poblano Pepita” was bitter, the “Pineapple Chipotle” was just sweet not smokey and the “Original” was totally bland.  But the worst part was that the chips were stale.  I asked our server if she could please bring us some fresh ones.  I’m pretty sure she just warmed up these same chips and put them back in front of us.  They were chewy and awful.

Oldest ordered the Spanish Octopus for $23.  He took one bite and said he couldn’t eat it.  For a $23 portion of tentacle,  it was not going to waste. Pass that bad boy over!  The octopus was way too chewy but I really loved the flavor.  I thought the pickled vegetables went well with it.  It was just ridiculously over-priced.  This is NOT what a $23 plate of food should look like. 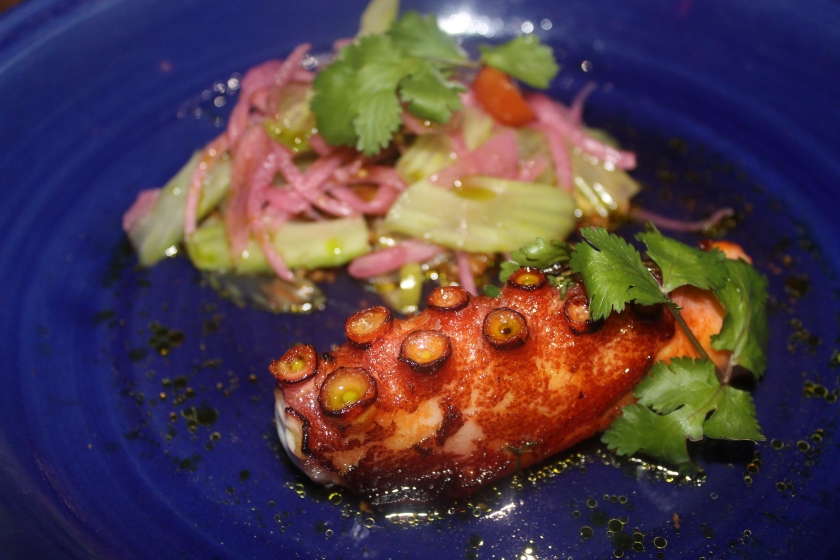 Joyce and Kelly tried to order a Baja Street Tostada but were told that Oldest Girlfriend had just ordered the last one.  Sold out again! They shared a Caesar Salad and really enjoyed it.  Joyce loved the radishes and light dressing.

They also shared some Mahi-Mahi Street Tacos which they loved.  Joyce said she would come back again for these tacos. Then again, Joyce has never been to The Taco Stand. 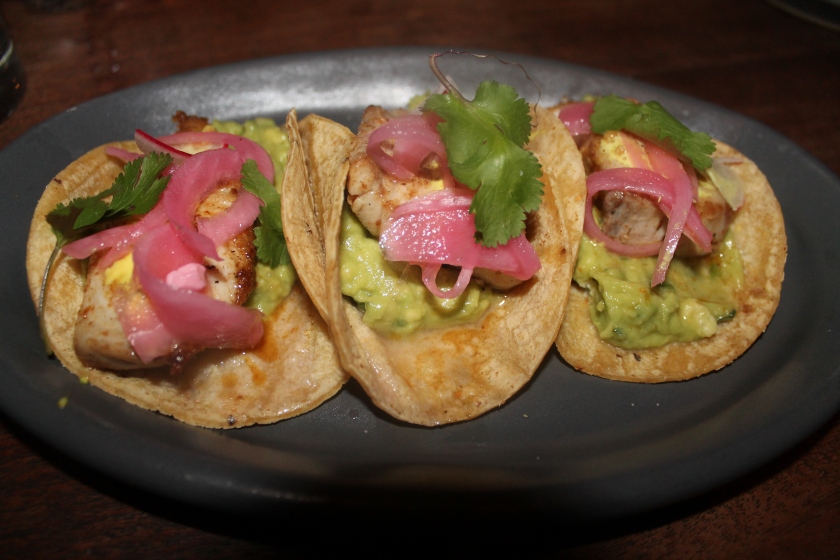 The trio of tacos were ok but charging $16 for three tiny street tacos should be illegal.   $16, Really? 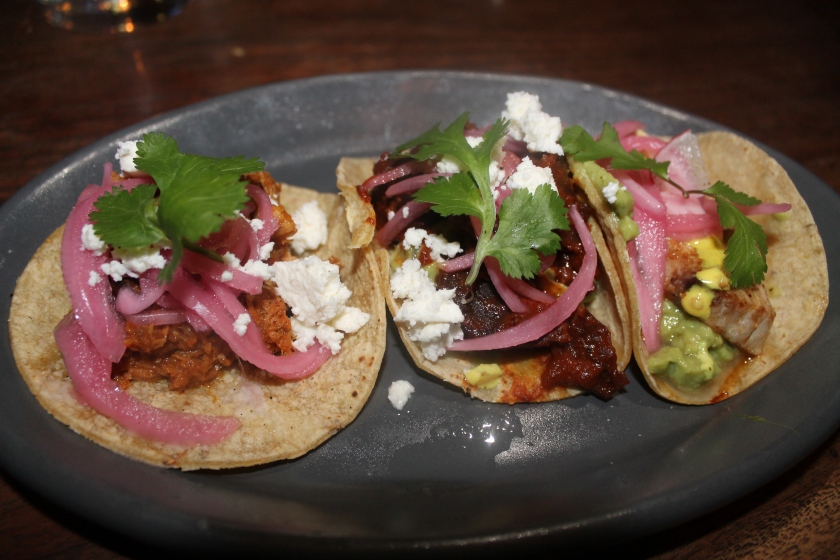 Diane tried to order the Market Fish Vera Cruz but was told, do I need to tell you?  SOLD OUT!  What the flip is happening here? On an already too small menu to have so many things sold out is freakishly weird.  She was told that since the restaurant is closed on Monday they are using up what they have. But they will have a full menu next week.  Basically, we are hosed for coming in on Sunday.   Can a restaurant toting a Top Chef All Stars competitor have his name connected to a restaurant this poorly managed?  Or are we being watched on a camera somewhere to see our reactions while we are getting Punked?

The “Bomba Chicken” tasted ok, but the blood orange vinaigrette tasted to me like a weak Thai peanut sauce. Why was I getting Thai flavor from a Baja restaurant?? Hubby labeled this dish “Four-Bite-Chicken”.  For $17! 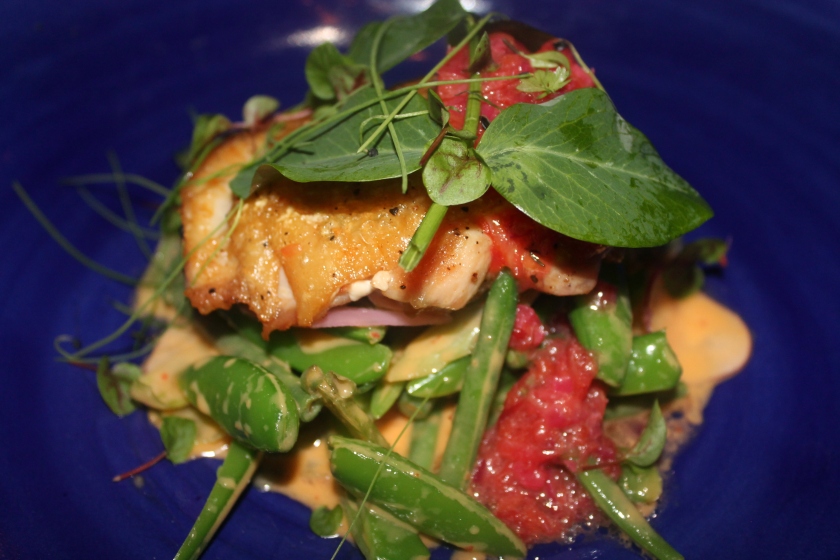 Hubby and I shared some Spicy Mole Potatoes with Chimichurri and Pickled Onions for $7.  At least this seemed to be a reasonable price for a side dish. I asked how spicy this dish was and the server was honest.  “Pretty spicy” was her answer.  I figured if they were too spicy for me, Hubby and Oldest wouldn’t have a problem with their fire-proof mouths.  I cut a tiny piece. popped it into my mouth and WHOOO WEEEE, I was breathing fire!  I’ve had spicy before but this was unbearable in my opinion.  I would like to say that at least it had a nice mole flavor to it but it really didn’t.  It was just HOT.  Hubby and Oldest powered through from mere hunger not enjoyment.

Oldest and Girlfriend got up to leave soon after.

“Where are you two going?” I asked

“To The Taco Stand for food, we’re starving” replied Oldest right after we signed for our $100+ small-plates dinner for four people that included only one drink.  With a bill this hefty, it needed a leather binder to contain it.

Nobody likes spending too much money on food they don’t like.  But when I tell you nobody hates it worse than Hubby, you must believe me.  There’s a whole new level of bitter and disgruntled I had to deal with on that drive home.  Once we got home, Hubby feasted on a pile of frozen waffles. 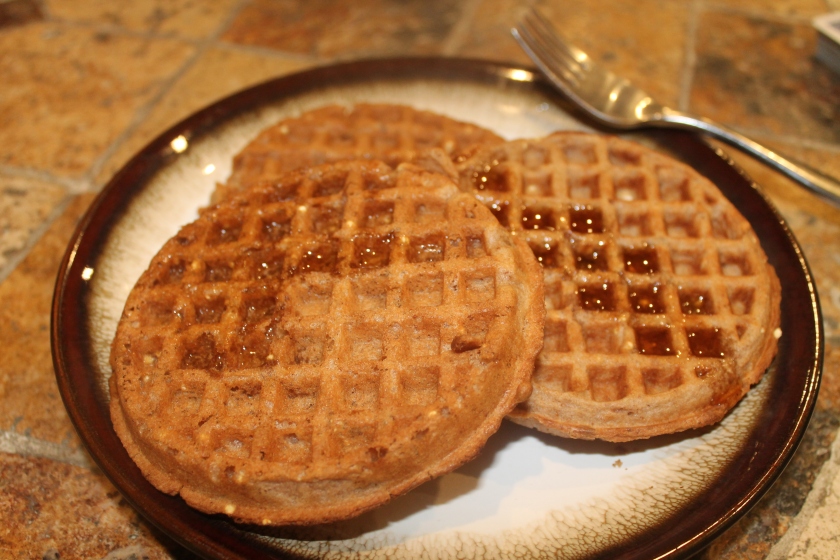 This was by far the most disappointing dining experience we have had on the 101.  It was not the worst food we’ve had but fell way way short of my expectations.  If you are going to serve “small plates” don’t price them the same as big plates!

If you are at the bottom of your stock on tequila, wine and food, then whatever you have remaining should be on “special”.  Otherwise your option is to close business until you can deliver what you should or, I don’t know, here’s a crazy concept, KEEP YOUR SUPPLY FULL! Have some standards and hold yourself to them!  We were told multiple times to come back another week when they had more tequila.  And wine.  And food.  But we were here tonight and expected to be served what was on the menu.  Silly us!

I always try to find positive aspects of each place because no place is all bad.  Although the octopus wasn’t tender, the flavor was delicious.  Joyce and Kelly loved their tacos and salad though neither did it for me.  And they have cool square ice cubes, I will give them that. So the most positive thing I can say is…. nice ice cubes.

Kelly was disappointed that we left not only thirsty for tequila, hungry from such small portions, but we didn’t even learn a thing about tequila.

If you really are looking to drown yourself to death in tequila, don’t come here on a Sunday.  They don’t have any!  TWO THUMBS DOWN.

Join us next week, Saturday, January 26th at 6pm where we will be eating breakfast for dinner at

6 thoughts on “Death by Tequila”