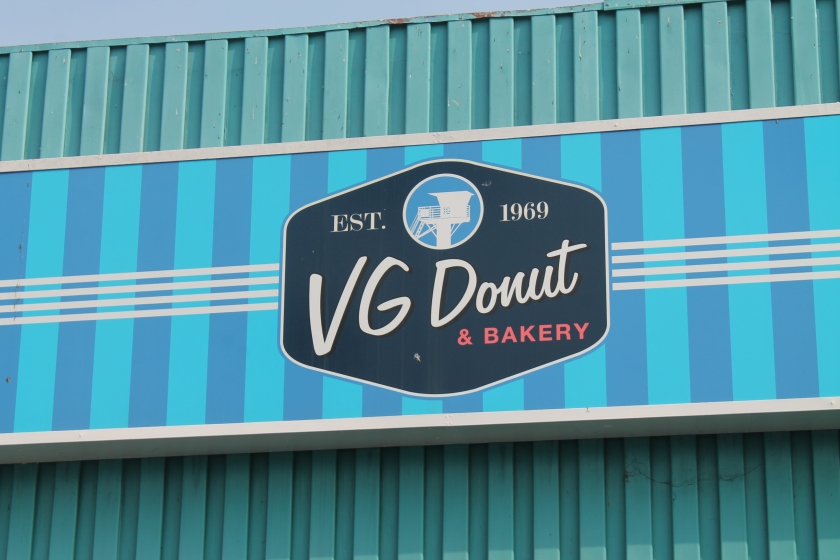 I’ve lived in Encinitas for over 17 years and have never been to VG Donut.  That’s right, I’ve never been! We just aren’t donut people.  In fact, Hubby and I can’t count how many years it’s been since either of us has eaten a donut from anywhere. Hubby didn’t want to go, but begrudgingly agreed.  Bottomless Pit didn’t want to go either.  I know, how could a 13 year old say “no” to donuts for breakfast?  But donuts have never been a thing in our family, so he thought it just wasn’t worth getting out of bed for.  Except as our car was pulling away, I heard him chasing us and yelling for us to wait, so he ended up joining us after all.  Smart choice.

When we pulled into the Cardiff parking lot at 8:30 this Sunday morning, I was shocked.  SHOCKED I tell you to see a line going all the way down the sidewalk for this place!  There must have been 30-40 people here!  For donuts! We noticed lots of people leaving with giant boxes of them.

They normally have a huge selection.  I was looking forward to shopping for my donut in the display case.  But when I finally got in the door, the server said, “NEXT!” before I could even begin my browsing.  How could I possibly know what to order before I can even get inside and look at what they have?  But if I missed my chance, I would have to get in the back of this hideous line and wait for another 20 minutes or so.

I panicked!  “I’m a food blogger.  I’m writing a review of this place.” I blurted out.  “What are you guys known for?”

“We’re out” she said, tapping her fingers on the glass.

“Just a Glazed donut then please.”

“Wrong again” she said pointing to the display case which I finally had a clear view of. 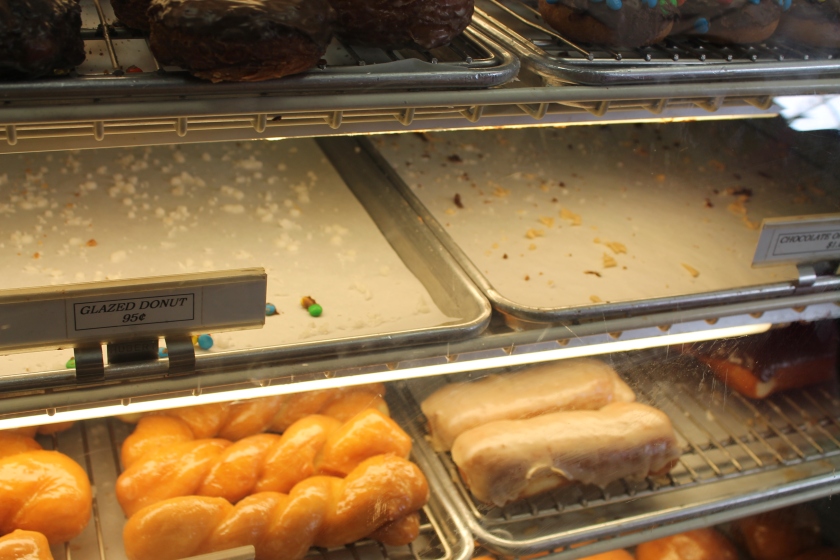 “Can you please recommend something that you have in stock?  I’m a donut virgin here and I don’t know what to do!”

The people behind me where noticeably annoyed.  “Get an Old Fashioned” said one of them.

“An Old Fashioned” I told Mira.  When we got to the register I saw it had chocolate on it and I just wanted a plain one. “Don’t kill me, but is there a plain one instead?”  I think I heard swearing from people behind me but I would like to think it wasn’t aimed at me and my lameness.

“Look” said Mira.  “The Chocolate Bars are coming out of the oven now.”

“I’m ok with the Old Fashioned, let’s just ring this up.”

“You didn’t hear me” she said emphatically.  “You NEED to get a Chocolate Bar too, they just came out of the oven DUMB ASS!”  (Ok, she didn’t say Dumb Ass, but I felt it.) With Hubby’s and Bottomless Pit’s order to boot, we finally made it outside.

We decided to start with The Chocolate Bar that was practically forced on us.  We cut it up to share and each took a piece. 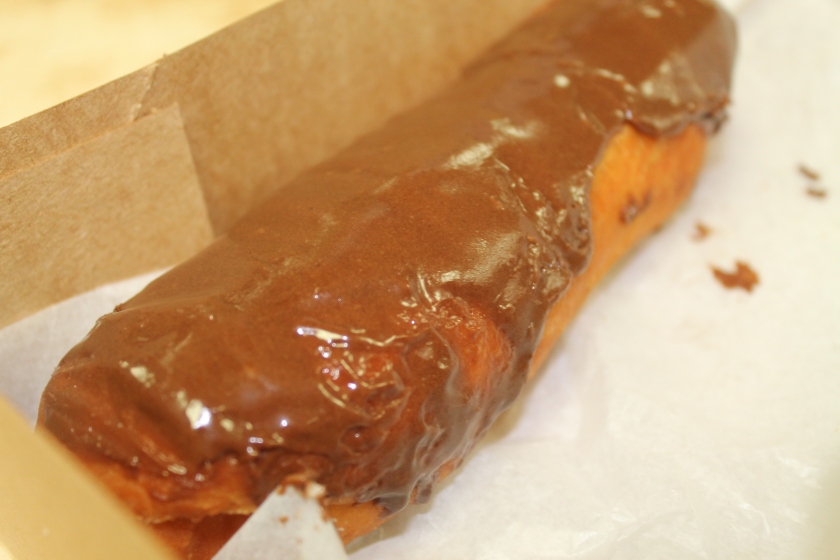 Holy Mother of Pearl!  Where the hell have I been?  Do other people know how amazing this is?  The decadent doughy donut that was not too sweet, smothered in warm, melty chocolate.  This is A-M-A-Z-I-N-G!   I’m now a believer. I noticed a bit of chocolate smeared on Hubby’s face.  Hmmm.

Hubby, refusing to order any donuts, was the one person to order muffins from VG’s.  He got a Honey Bran, Banana Nut and a Blueberry Scone.  All were surprisingly moist, and very good.  But let’s not call that blueberry BISCUIT a scone.  Definitely “biscuit”, not scone despite the label. But still yummy! 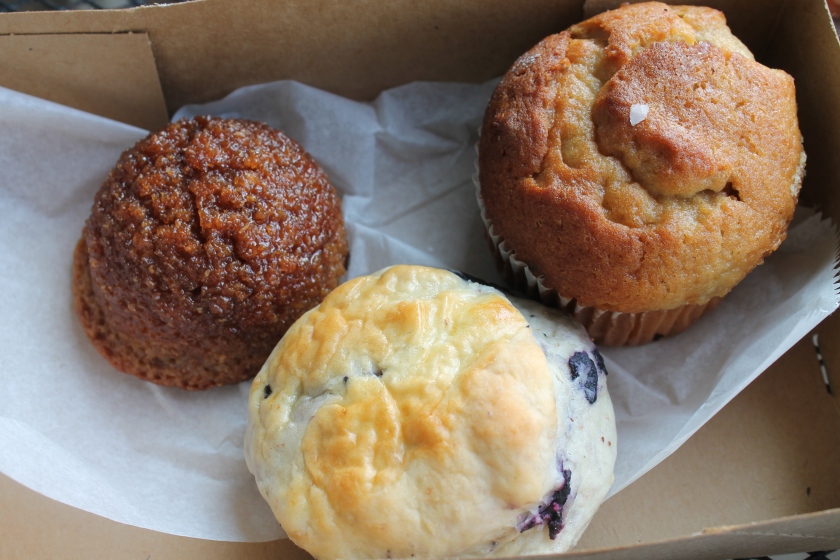 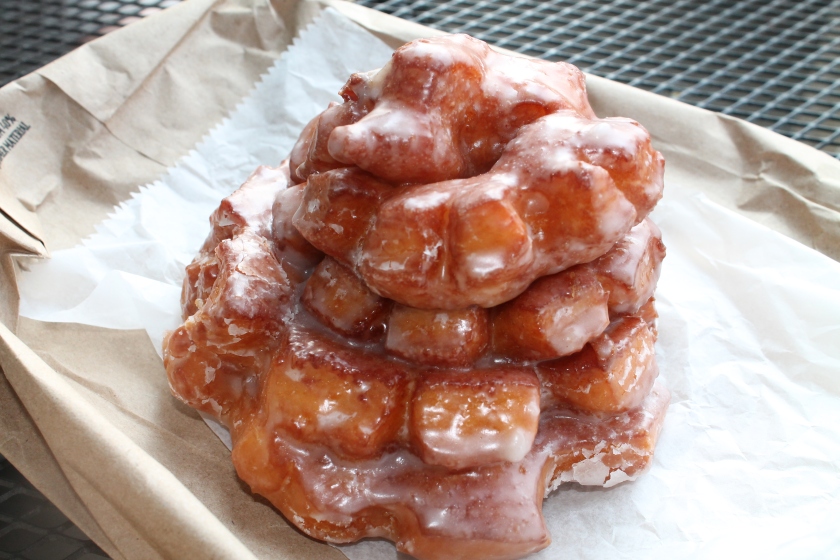 BP had his paws on a Dossaint (VG’s version of a New York Cronut) which is a hybrid donut-croissant.  Buttery, flakey layers of donut instead of a solid and dense one.  It’s good any way you layer it. 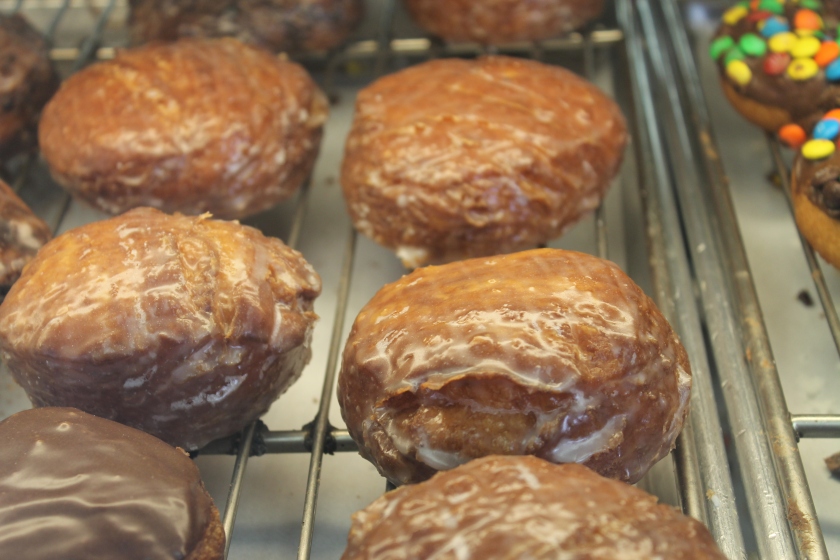 Everything we tried (and yes, I am including Hubby, the non-donut eater in this “We”) was superb.  But I am no donut expert.  To get a true review, I should defer to the local regulars.  Fortunately, there were two sitting right next to us. 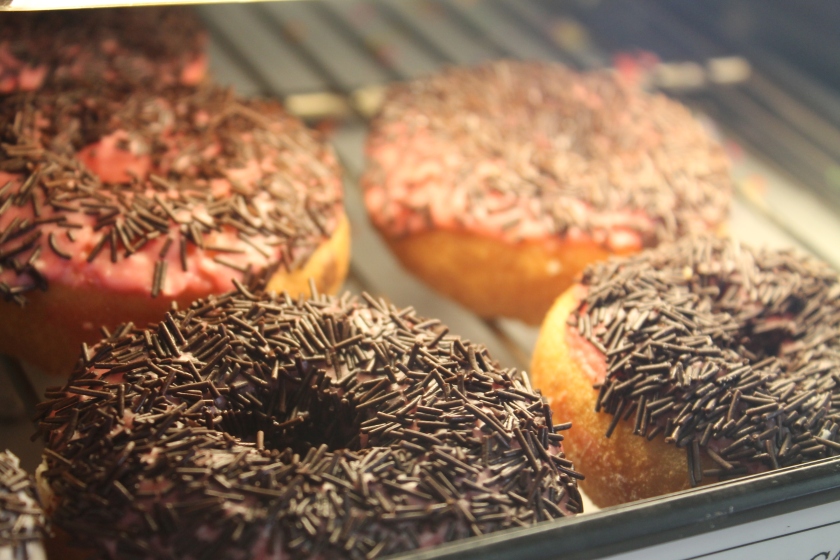 Sister Maddy, age 5, says “GLAZED!” with a mouthful of glazed.  I glared at her, knowing that she was the one who got the last one.  I don’t care if she’s 5.  Bitch took my glazed!

A donut alone is a dessert, but a donut plus coffee is a breakfast.  Rumor has it that VG’s coffee isn’t so great.  True, it isn’t anything fancy, but I think it pairs perfectly with their donuts and muffins.  I think an unpretentious cup of joe is exactly what this simple, retro donut shop needs.

Get to VG’s early or you might miss out on your favorites because they sell out fast!  But you know what won’t sell out?   Their muffins and other healthier choices like whole grain rolls.  The shelves were stocked. 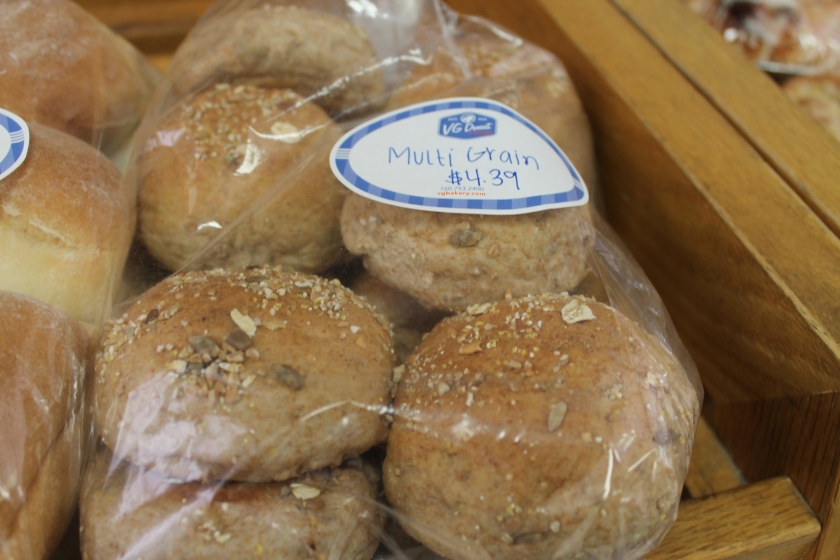 Is VG Donuts really worth the hype?  This blogger says YES! 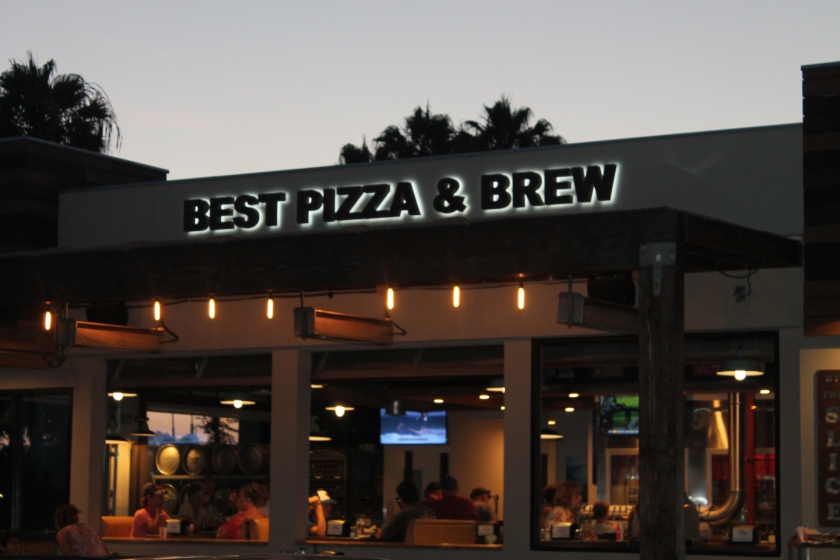 We decided to make Sunday a double blog day.  When you start your morning off with donuts, your chances of successful healthy eating for the day are shot to hell.  May as well start with donuts and coffee and finish with pizza and beer.  Seems logical.

Over the years, I have seen this location go from one unsuccessful burrito shop to the next, but never has anyone upgraded it so well!  Best P&B took out some walls, made room for outdoor seating, and turned this place into a very cool, hip hangout.  I have never seen it filled with so many people either!

Pizza by the slice is the thing here.  There are many combinations to choose from, all reasonably priced.  (1 Slice and a T-shirt $8, I love it!) 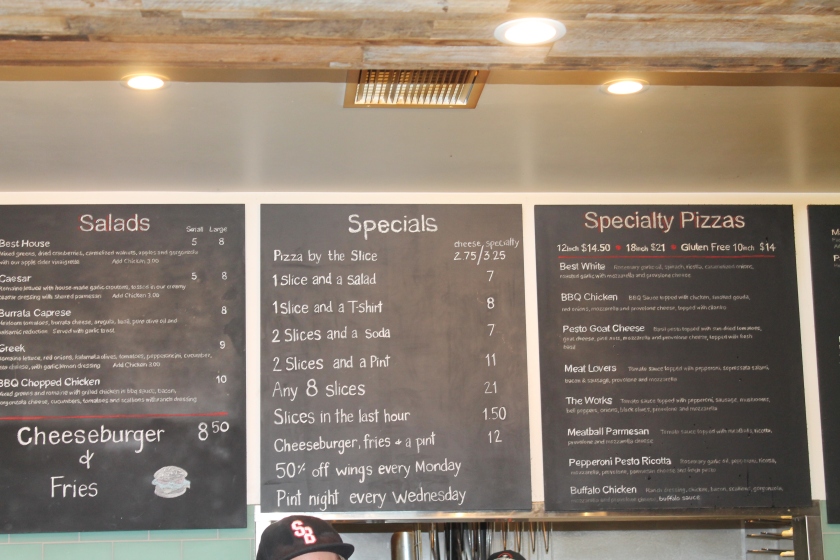 It’s nice to see the pizza before you order 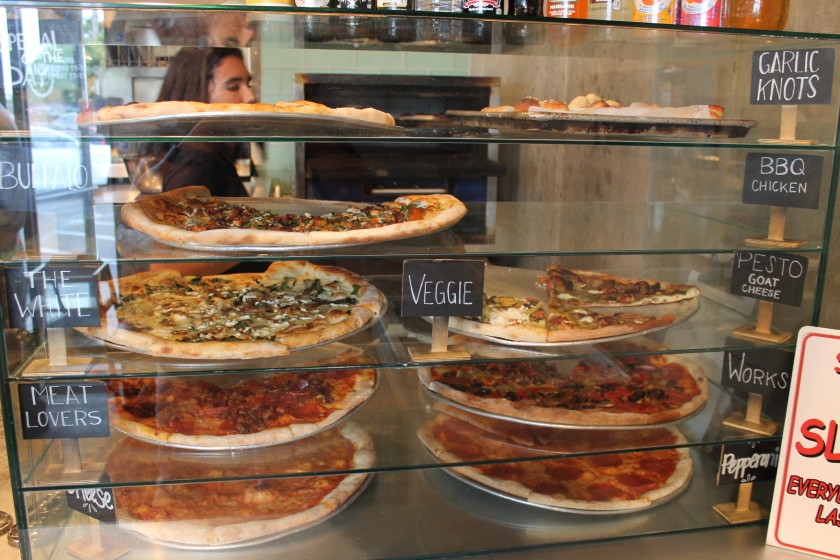 They have a large beer menu, but I saw only ONE choice for me!  That would be a #7! What is a beer from the tiny town of Davis doing all the way down here? Our beers were waiting for us at the beer counter as soon as we paid for our order.  They were filled to the tippy tippy top, so you have to take a sip before you can pick them up.  I like that.  A lot.

One sip of this Sudwerk Pilsner and I was immediately taken back to the year 1989, in college at UC Davis when Sudwerk first opened.  Sittin’ at Sudwerk on a Thursday night with a group of friends.  Always a Thursday night.  Jessica, Tareq, Anne, Danielle, Stacey, Tina, Brian and Rachael.  All of us!  Drinking a huge stein of Martzen (the pilsner is great, but it has nothing on the Martzen!).  Ok usually two steins.  Stumbling the two miles home.  Boyfriends were made.  Friendships were ruined.  We laughed. We cried.  We laughed a lot. We did really stupid stupid stuff.  They shouldn’t put railroad tracks so close to a brewery.  All on Sudwerk beer.  SUCH GOOD TIMES!  Hubby had to clap his hands in my face to bring me out of my nostalgia.

Everything arrived pretty quickly.  The Best House Salad was exceptionally good. In fact, I think it was even better than the pizza! 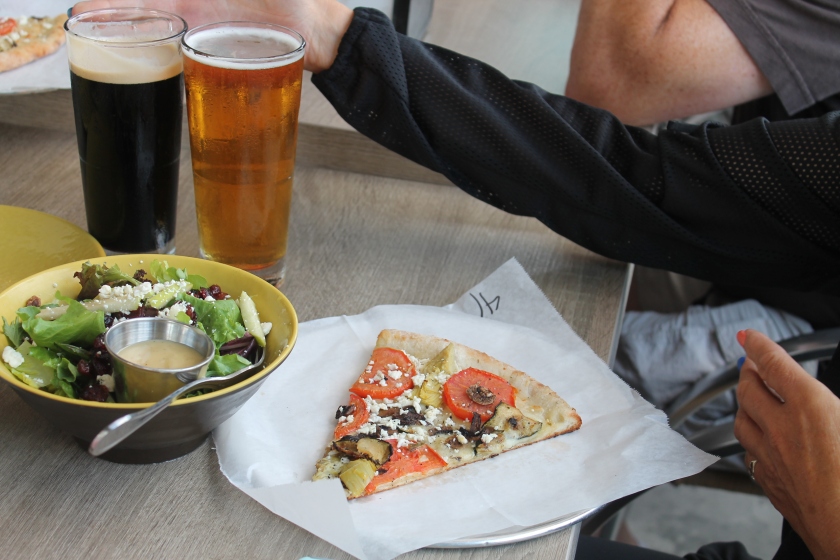 The Pepperoni Pesto with Ricotta was delicious.  I find so many restaurants can’t get their pesto right, but Best P&B does!  Their veggie pizza was equally good:  lots of fresh, generous vegetables. 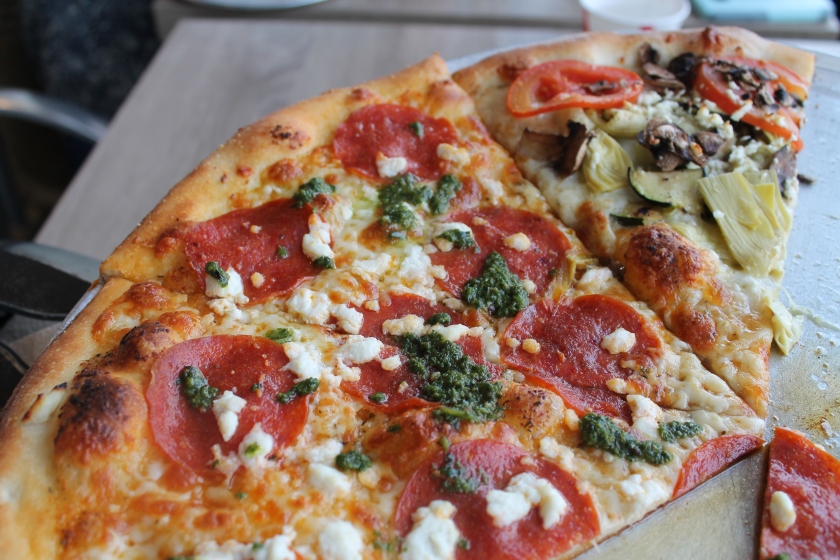 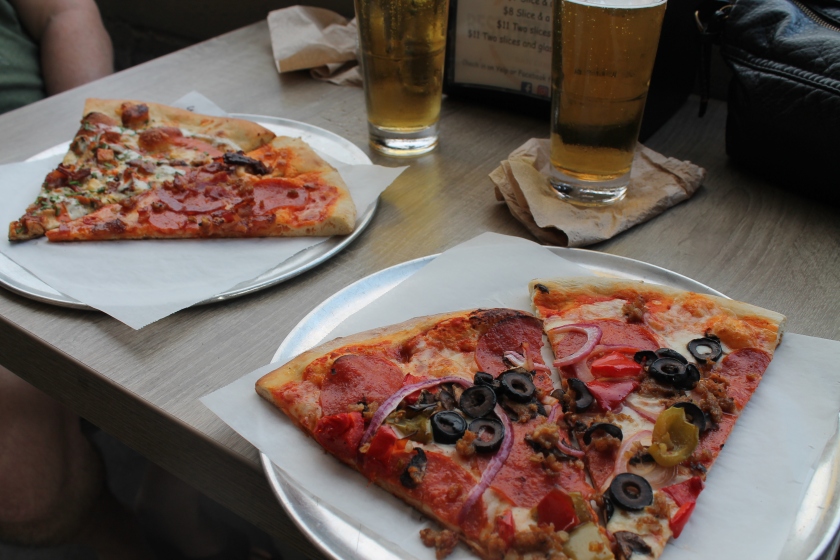 I thought the Teriyaki Chicken Wings were dynamite.  But Sagan, age 7, disagreed.  “Too saucy” he replied.  I see his point.  Not everyone appreciates that much sauce.  A side of both ranch and blue cheese were brought for dipping, but with teriyaki??  No thanks. 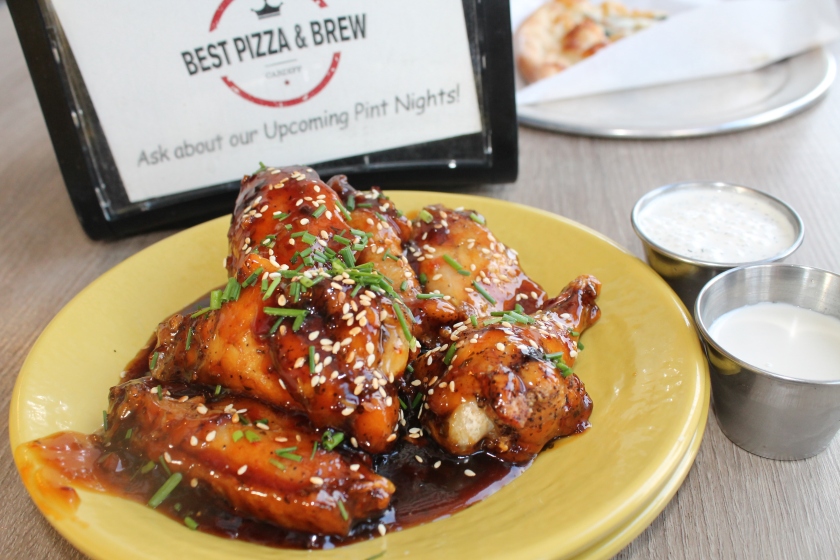 As we finished dinner, two brown boxes suddenly appeared in front of me.  “Open them” ordered Tracy from the other end of our table.  The first box contained Thumbprint cookies from VG’s, which Tracy had told me to order earlier this morning.  Which I didn’t.  Which really pissed her off! And now I know why.  They are really good, and totally worthy of trying!  These are her favorite cookies (that her mom doesn’t make). 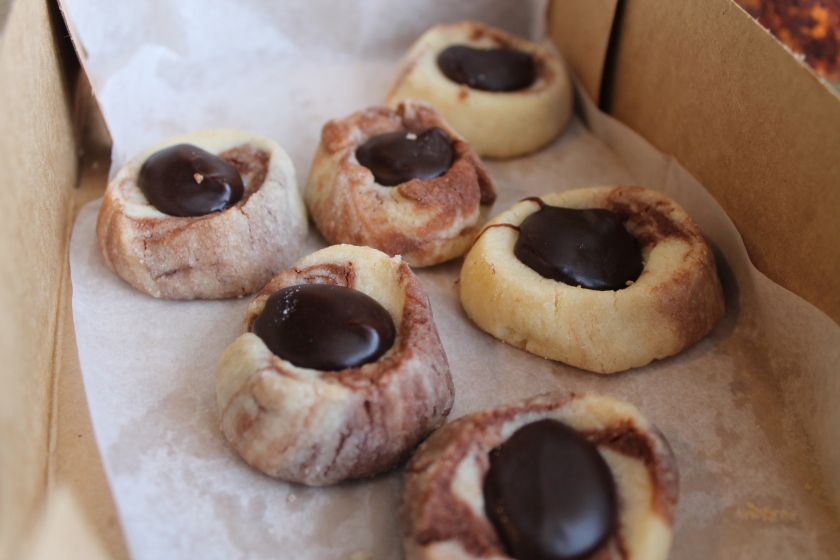 But the best thing was in Box #2.  VG’s sacred Blueberry Buttermilk donuts!  What she knew, that I didn’t, is that VG bakes donuts not once, but TWICE a day!  These were freshly baked just a few hours ago.  Many forks were flying around my precious box trying to get in on the action, so I quickly speared a hunk before passing it around.  WOW!  So good!  If this were warm and just out of the oven, it would be hands down the winner of all donuts!  But even at room temp, it’s to die for!  Thanks Trace- what a friend! 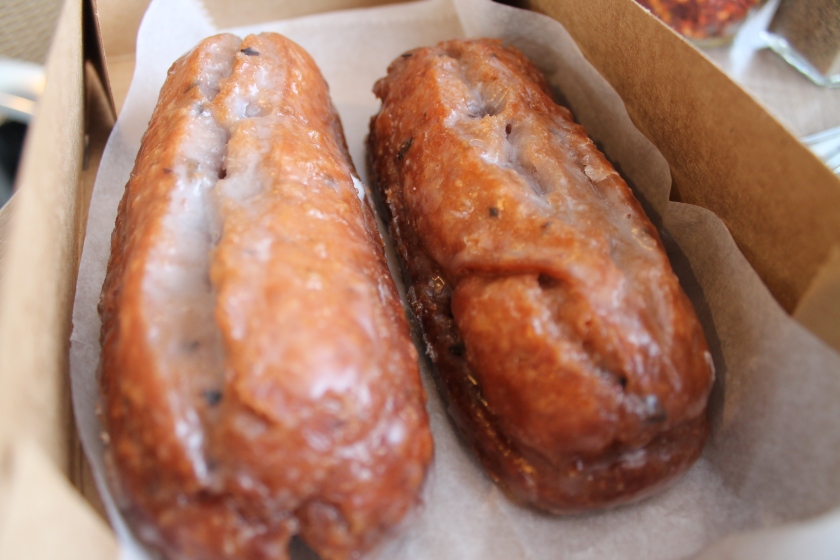 Best Pizza & Brew is awesome!  Such a fun place to come with friends.  The beer and pizza are top notch.  Ok, maybe the pizza isn’t literally the “best” but I thought it was great. Again, Sagan-the-critic was right there.  “The crust is not crunchy enough.  It is not the best.  East Coast Pizza is way better.”  I wouldn’t know because we haven’t gotten that far up the 101 yet, but I suppose we will see!

We will be doing another double blog this Sunday, July 22nd.